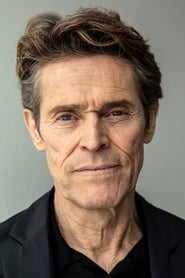 Biography: William James "Willem" Dafoe (born July 22, 1955) is an American actor. He is the recipient of various accolades, including the Volpi Cup for Best Actor, in addition to receiving nominations for four Academy Awards, four Screen Actors Guild Awards, three Golden Globe Awards, and a British Academy Film Award. He frequently collaborates with filmmakers Paul Schrader, Abel Ferrara, Lars von Trier, Julian Schnabel, and Wes Anderson. Dafoe was an early member of experimental theater company The Wooster Group. He made his film debut in Heaven's Gate (1980), but was fired during production. He had his first leading role in the outlaw biker film The Loveless (1982) and then played the main antagonist in Streets of Fire (1984) and To Live and Die in L.A. (1985). He received his first Academy Award nomination (as Best Supporting Actor) for his role as Sergeant Elias Grodin in Oliver Stone's war film Platoon (1986). In 1988, Dafoe played Jesus in Martin Scorsese's The Last Temptation of Christ and costarred in Mississippi Burning, both of which were controversial. After receiving his second Academy Award nomination (as Best Supporting Actor) for portraying Max Schreck in Shadow of the Vampire (2000), Dafoe portrayed the supervillain Norman Osborn / Green Goblin in the superhero film Spider-Man (2002), a role he reprised in its sequels Spider-Man 2 (2004) and Spider-Man 3 (2007), and the Marvel Cinematic Universe film Spider-Man: No Way Home (2021) earning him the Guinness World Record for the "longest career as a live-action Marvel character". He also portrayed the villains in Once Upon a Time in Mexico (2003) and XXX: State of the Union (2005), as well as Carson Clay in the film Mr. Bean's Holiday (2007). In 2009, he starred in the experimental film Antichrist, one of his three films with Lars von Trier. Dafoe then appeared in The Fault in Our Stars, John Wick, The Grand Budapest Hotel (all 2014), The Great Wall (2016), Murder on the Orient Express (2017), The Florida Project (2017) (for which he received his third Academy Award nomination in the Best Supporting Actor category), The Lighthouse (2019), The French Dispatch, and Nightmare Alley (both 2021). He portrayed Nuidis Vulko in the DC Extended Universe films Aquaman (2018), Zack Snyder's Justice League (2021) and Aquaman and the Lost Kingdom (2022). Dafoe has portrayed several real-life figures, including T. S. Eliot in Tom & Viv (1994), Pier Paolo Pasolini in Pasolini (2014), Vincent van Gogh in At Eternity's Gate (2018) (for which he received an Academy Award for Best Actor nomination, his first in that category), and Leonhard Seppala in Togo (2019).


Most Popular Movies of Willem Dafoe

The Last Temptation of Christ